Read the full commentary below.

Earlier this month, Risk Intelligence reported sales data for the fourth quarter and the full year 2021. During the full year, revenues increased by 20 per cent to DKK 18.8 million, and in the fourth quarter, revenue increased by 13% to DKK 7.5 million. The outcome was thus bang in line with our forecast. The growth was mainly driven by an increase in average revenue per customer (ARPU). Increasing ARPU comes with good scalability and therefore creates the conditions for the company to improve its profitability.

Risk Intelligence has a high proportion of recurring revenue (ARR), in other words, revenue secured with long-term contracts. These revenue streams are valuable because they create predictability and thereby reduce risk. At the end of 2021, recurring revenue from the Risk Intelligence System amounted to DKK 14.6 million, corresponding to a growth of 15%. Total recurring revenue, including subscription revenues related to the company’s risk reports, also grew by 15 per cent and amounted to DKK 16.0 million at the end of 2021. Growth in recurring revenue is also likely to be an effect of increased average revenue per customer. At the same time, the percentage of terminated contract value increased to 3.9 per cent in the past quarter. For the full year 2021, the percentage of the terminated contract value was 3.2 per cent, compared to 1.4 per cent in 2020.

We look forward to the year-end report, which will be released on 23 February. 2022 will otherwise be an exciting year for Risk Intelligence and its push for the LandRisk Logistics, an application with good potential in a large market. In a base case scenario, we calculated a justified value of DKK 11.7 on 7 Dec. 2021. Read the initial coverage report here.

Like the stock market in general and small caps in particular, Risk Intelligence’s stock has had a rough start to 2022. The weekly chart below shows that the rising trend has been broken. Support on the downside can be found around DKK 4.0-4.1. 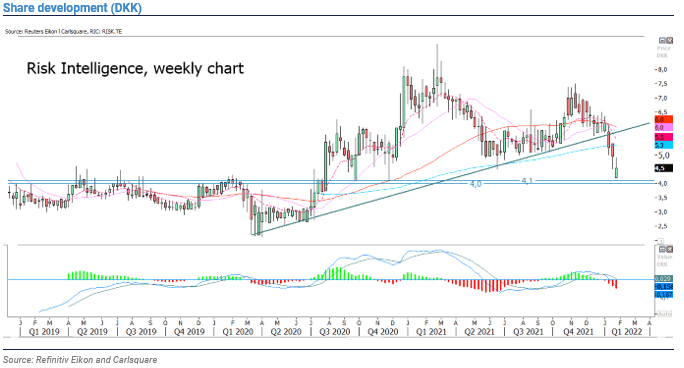 Carlsquare AB, www.carlsquare.se, hereinafter referred to as Carlsquare, conducts business with regard to Corporate Finance and Equity Research in which areas it, among other things, publishes information about companies including analyzes. The information has been compiled from sources that Carlsquare considers to be reliable. However, Carlsquare cannot guarantee the accuracy of the information. Nothing written in the analysis should be regarded as a recommendation or invitation to invest in any financial instrument, option or the like. Opinions and conclusions expressed in the analysis are intended only for the recipient.

The content may not be copied, reproduced or distributed to another person without the written approval of Carlsquare. Carlsquare shall not be held responsible for any direct or indirect damage caused by decisions made on the basis of information contained in this analysis. Investments in financial instruments provide opportunities for value increases and profits. All such investments are also subject to risks. Risks vary between different types of financial instruments and combinations of these. Historical returns should not be considered as an indication of future returns.

The analysis is not directed to U.S. persons (as defined in Regulation S of the United States Securities Act and interpreted in the United States Investment Company Act 1940) nor may it be disseminated to such persons. The analysis is also not directed to such natural and legal persons where the distribution of the analysis to such persons would result in or entail a risk of a violation of Swedish or foreign law or constitution.

The analysis is a so-called Commissioned Research Report where the analyzed company has signed an agreement with Carlsquare for analysis coverage. The analyzes are published on an ongoing basis during the contract period and for a usual fixed remuneration.

Carlsquare may or may not have a financial interest in the subject of this analysis. Carlsquare values the assurance of objectivity and independence and has established procedures for managing conflicts of interest for this purpose.

The analyst Markus Augustsson, Jonatan Andersson and Lars Johansen Öh does not own and is not allowed to own shares in the company analyzed.